Mistress Emily Jones wanted to see this loser return her money. She had lent him money and he had promised to repay months ago but up to now he had not done it. She had run out of patience and she forced him to give her the money. She did this by trampling and crushing him. She told him that was the lightest punishment he would ever get from her. And if he did not pay, he should blame himself for what would follow. He paid her.

Madame Svea and her socks torture

Madame Svea is not your regular mistress. She likes to use her socks to punish. It looks harmless but it is quiet effective. And hers are not dirty and smelly socks like other mistresses. She likes to make slaves chew her socks and she also uses the same socks to cover the noses and mouths of those she wants to humiliate and punish. In doing so, she chokes them and she gets what she wanted by doing so.

Mistress Jessica likes to stomp. She is not like other mistresses who like to touch the slaves. She prefers to use her boots and the best way she uses them to punish and humiliate is by crushing them and stomping them. Sometimes she jumps on them and she gets the results she wanted when she started. She wanted this slave to be hardworking and after she was done with him, he became hardworking.

Madame Marissa was not pleased with how her slave smelled. She wanted him to take good care of himself. He was staying in her house and he was using her stuff and she was not comfortable with how dirty he was. She had to do something about it and she did. She kicked him and slapped him before she slapped him as painfully as she could as he rolled on the floor.

Lady Karame spoke to her slave but he kept quiet. She was offended and she took it as a sign of disobedience. She took a latex mask and she used it to cover his face. She then trampled his face with her bare feet to choke him. He tried to beg for mercy but she told him to keep quiet like he had done when she tried to talk to him.

Mistress BlackDiamoond and her friend caught this guy stealing from their neighbor and they had to punish him because their neighbor was not around. He had to be taught a lesson and he had to learn it the hard way. The mistresses whipped him as cruelly as they could and they made sure he was in pain before they let him go. He screamed and begged them to forgive her before they did.

Mistress Eleas caught her slave trying to escape. She was pissed at that because she had tried her best to make him feel comfortable. She had not even been punishing him. Now she had to change all that and show him who she was. She tied him up and she used her sneakers as well as bare feet to humiliate him. She tortured him slowly and made him regret what he had done.

Princess Serena did not like how her slave chewed food loudly. She wanted him to change how he did it and he had no choice but to do what she wanted. She forced her slave to put his face inside a trampling box. She then facesat on it using her jeans and she forced him to lick and smell her ass as well as her farts. She degraded him cruelly before letting him go.

This mistress heard that her slave had borrowed money using her name and she was pissed. She did not want her slave to incur debts on her behalf. She wanted to punish him and she did it by forcing him to lick her feet and smell them. She also used the same feet to trample him. She then told him that if he was not careful, she would beat the shit out of him. 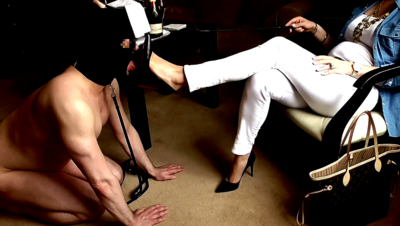 Buy this video at Yezzclips.com now!

Lady Carmen has a big ass and she is proud of it. She however does not take it kindly to guys making fun of her big ass. Anyone who dares do that has to face her wrath. She is never happy with anyone making fun of her weight and she has to punish them. She always punishes them with the same weight they make fun of and she does this by facesitting on them.